I took part in the Tunbridge Wells Half Marathon in 2017 and 2018, and loved it both times.

The thought of running my local Half Marathon is never exactly appealing, though! Famed for a challenging route with an ascent of over 300ft thanks to Spring Hill at Fordcombe, the one-lap circuit contains numerous other hills and is definitely not the type of course you’d aim to get a Personal Best on.

But despite the horrendous hills, the Tunbridge Wells Half Marathon is quite scenic and takes runners through the countryside and cute villages. I detest hills so historically avoided this event like the plague, but now that the route is familiar and I know what to expect, I will likely end up taking part every year.

Affiliated entry with the Tunbridge Wells Harriers was £26 which I paid for online, and collected my running number and long-sleeve technical t-shirt from the nearby Sports Leisure Centre, which was very quick and simple. The entry fee included the t-shirt, bespoke medal, water, bananas at the finish line, chip timing and baggage facilities, which I didn’t need to use.

I woke early on Sunday 17th February and consumed a porridge pot, cup of tea and orange juice, before walking up to the race HQ thirty minutes before the 9am start time. Portaloos were provided and there was barely a queue. I ate a banana, sports Jelly Beans; and then two Clif Energy Bloks as we were setting off.

It was made clear on the website and in email comms that headphones were banned this year due to new regulations, and I don’t like the look or sound of the only-acceptable Bone Conduction headphones. However, running without music in my ears is a deal-breaker for two reasons: firstly because I’m asthmatic and breathe heavily when I run, so if I can hear it then I put myself off and end up concentrating on breathing too much and don’t relax into running. Secondly because listening to other people breathe and wheeze whilst running also puts me off, and then I think about my own breathing and it throws my breathing pattern. Plus, I find music really motivating and it definitely carries me when the going gets tough! So, bearing in mind that I always wear thick headbands when I run, I treated myself to a pair of wireless Apple AirPods. At £159 they aren’t cheap, but easily fit under a headband without being detected, and I will definitely get my money’s worth! They worked brilliantly and were comfortable under the headband. Good job too, because the headphone rule was actively marshalled at the event! Around mile 4 or 5, an event car crawled up beside runners and asked them to remove headphones.

The run itself was fab. I felt really good and was buzzing – I had trained enough and prepared sufficiently; the day before, I had drunk endless bottles of water and ensured I was adequately fuelled. I felt like it had all made a difference! I opened an energy gel and sipped it slowly during the 300+ft ascent at mile 6, then had another at mile 10. There were a number of well-marshalled water stations situated throughout the course, which came in handy! The weather went from a little chilly at the start, to quite warm and sunny throughout – perfect running conditions. I was with my friend Samantha, and we ran at her pace; I waited for her throughout the course. If I’m being brutally honest, I could have finished 5/10mins quicker and gained a course PB if I had run this alone, but I’ve never run an event with anyone before and it was nice to have the company. 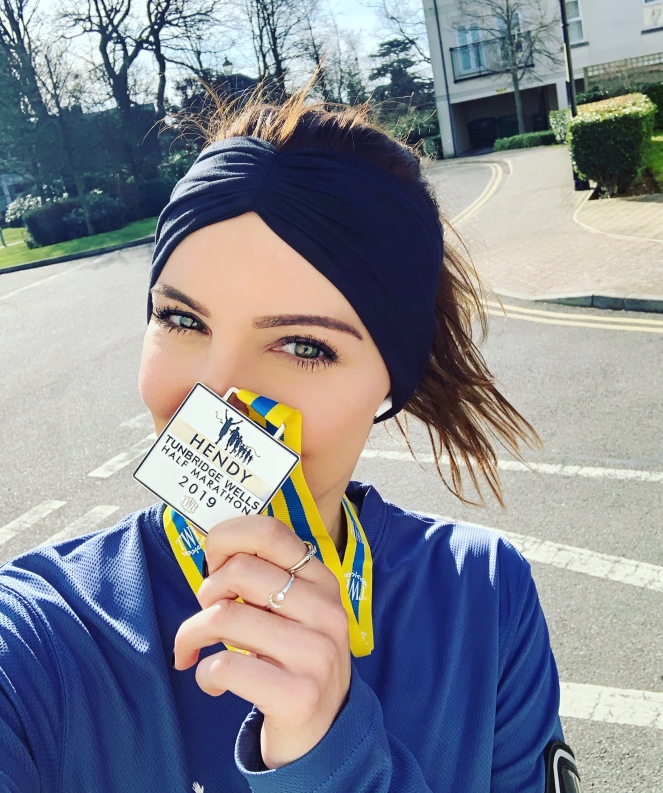 Overall I really enjoyed this run; I felt fabulous and healthy. There is nothing negative to note about any element of Sunday – the marshals were cheerful and motivating and there were no obvious bottle-necks or frustrations. The course had pockets of lovely spectators who waved signs and handed out Jelly Babies. There was free water and fruit handed out at the finish line and the bespoke medal is lovely and chunky. The race photos from SportsCam were also available 24hrs after the event, which is days quicker than London events!

This is an event I’d definitely recommend to others and I’m glad to have taken part for the third time.