I was treated to a new Fibit Charge 2 on my birthday last April, having previously worn Jawbone activity trackers for a few years.

The Charge 2 was my first Fitbit experience, and I loved it. I wore it every day and had a variety of coloured interchangeable bands to play with. I liked the design and the fact that it has all the features of the Jawbone UP3, plus more.

So, when it was announced that Fitbit were launching a new Charge 3 model, due for release on Sunday 7th October, I knew that I would be picking one up. 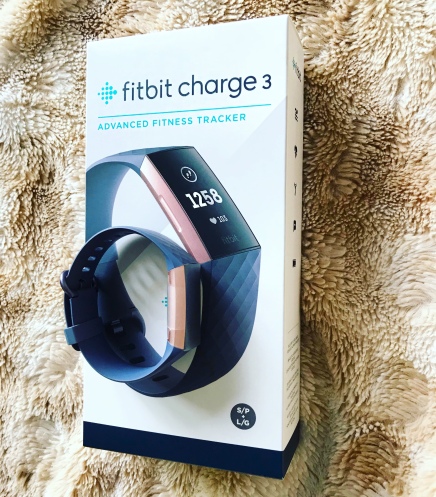 On that day, I walked into Curry’s who refused a sale and told me that the new model was ‘embargoed’ for another week (even though they had them on display and available on the website!). Luckily, Argos had plenty in stock. At £129.99 the Charge 3 isn’t cheap, but it’s actually cheaper than the Charge 2 was last year (around £140).

The Charge 3 comes in a variety of colours; Black/Graphite and Blue Grey/Rose Gold; or Special Edition colours in Lavender Woven/Rose Gold and Frost White Sport/Graphite. The Special Editions are more expensive and come with a ‘Fitbit Pay’ software tool and different textured wristbands. I didn’t like or want either of these functions so opted for the Blue Grey/Rose Gold version.

Once home and unboxed, the Charge 3 was simple and easy to set up and start using: it required charging and then ‘pairing’ with Bluetooth. From there, it was just a case of playing around and experimenting.

As with the Charge 2, the step count shows up on the clock-face as you step in real time, which saves having to log into an app and performing a manual sync to see how many steps you’ve done. I can pick and choose what displays on my clock-face and how the information is presented. My iPhone text messages show up on the screen and I can read the whole message.

So, how is it different to the Charge 2?

The Charge 3 has a grayscale OLED touchscreen display with no side-button, meaning that you now swipe between different app functions, and swipe up or down for notifications and fitness stats, instead of clicking the button. The Charge 3 has a side pressure-sensitive haptic feature – you squeeze an indented area to quickly access settings, or pause or stop workouts – and the vibrations feel stronger.

Plus, the Charge 3 has increased water resistance (it’s now swim-proof!), ‘expanded notifications’, quick message replies, improved battery life (up to seven days from five), and ‘more durable’ construction. There’s an Exercise mode (with 15+ Goal-Based Exercise Modes and Cardio Fitness Level), a Relax mode (with Guided Breathing Sessions), Female Health Tracking (which tells you when your period is due, when you’re ovulating, etc), weather, an alarm, a stopwatch and timer. There is also Automatic Exercise Recognition, all-day calorie burn and all-day activity tracking, and a 24/7 Heart Rate Monitor, including Resting Heart Rate.

On top of that, the Charge 3 comes with two different sized wristbands in the box – Small and Large – and the rubber feels super comfortable and is easy to take on and off. Seriously, what more could you ask for?!

So why have I chosen a Fitbit instead of a Smart Watch, such as the new Apple Watch? According to Fitbit’s research, 42% of adults planning to purchase a wearable are looking for an activity tracker, compared to 36% looking for a Smart Watch – and I’m in the 42%. The Charge 3 ticks every box for me. This is a clock, messenger, sports watch, sleep tracker, period tracker, and heart-rate monitor all in one, and I love it. I can’t recommend the Charge 3 highly enough!

UPDATE, 15th January 2019: My Charge 3 stopped working completely, two weeks after I’d bought it in October – the screen went black, it was unresponsive even when charging, and I couldn’t do anything with it. Luckily Argos exchanged the item without any fuss, but this second band isn’t much better. It has moments when it’s completely unresponsive, and if you press ‘Start’ on an activity such as running or walking, it will randomly stop working and won’t record the whole session. I preferred the Charge 2 and would no longer recommend the Charge 3.