I’ve been so bad with running recently. So bad!

My fitness regime has completely gone out of the window. Aside from rock-climbing, I haven’t done any other form of exercise and haven’t been running for a few weeks. Part of me feels guilty about this, and I do miss my favourite hobby, but it’s also been a nice change to try and relax – especially after a really busy, pressurised first half of the year, where I trained for and completed the Brighton Marathon alongside the equivalent of a BA (Hons) degree and a certificate in GDPR.

However, I went kayaking for the first time this month, which was so much fun! My sister Nicola lives in the South of France and I went out to stay with her over five days recently, with mum and another sister, Jo. Nicola took us to a beach where you can hire kayaks and follow a route through the ocean, with the option to stop at various points/beaches. 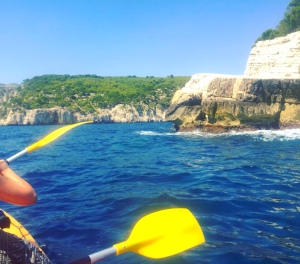 We were each given a lifejacket and an oar, which were in different sizes and corresponded to our heights. Necessities such as bottles of water, mobiles, sun-cream and towels were shut inside waterproof barrels and secured to the backs of the kayaks.

We kayaked for an hour and a half across the ocean, which was so much fun, but also a challenge! Numerous boats – cruisers, speedboats – went past us and created waves of all sizes, which was equally exhilarating and terrifying, as we tried to ride them! Our trio had to keep in rhythm with each other, and it was definitely tiring. I was ready to stop by the time we reached a beautiful cove, with a pebble beach and clear turquoise water. The scenery was breath-taking; it was the most stunning place I’ve seen. The beach itself was busy, but we easily found a spot to drag our kayaks onto and lay our towels down for a rest. We dipped in and out of the water, swam, sunbathed and explored, and it was probably my favourite part of the whole holiday. The cove was so beautiful!

Three hours of kayaking was tiring, but that was outweighed but the amount of fun we had. It was definitely an experience that I’d recommend to others! Just don’t fall in  🙂

So now it’s back to normality; and with the Royal Parks Half Marathon coming up in October, I should really be training and preparing myself! Let’s get back on it…