The Running Awards is an annual awards ceremony celebrating the best of running and its culture.

The prestigious awards ceremony welcomes sports industry figures as well as key members of the running community and press, to witness the best in the industry (as independently voted for by runners) receive Running Awards trophies.

From the running public’s nominations and votes, The Running Awards creates a list for runners to consult for their every need: From Events and Communities to Shoes, Clothing, Nutrition, Technology, Charities and more, runners can vote for free in a variety of categories in order to identify the best in running each year.

The Running Awards returned to Indigo at London’s The O2 Arena on Thursday 19th April 2018 for its fifth anniversary, and I was lucky enough to be invited along as a guest to the Bloggers Forum, after an event organiser contacted me through Twitter. 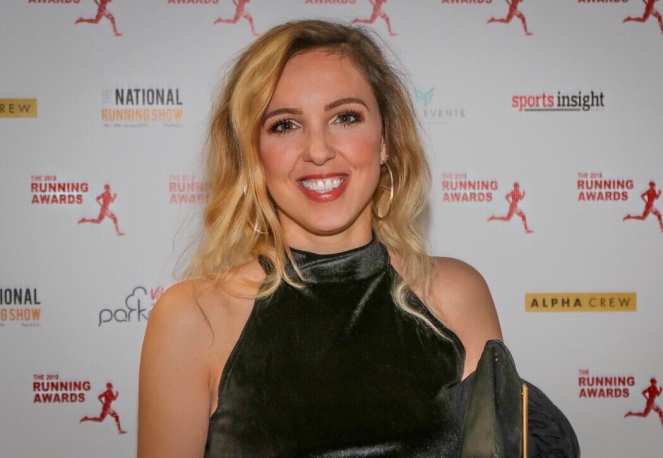 I planned to go alone, but in the weeks leading up to the Awards I found out that Matt (@mbodkin1) and Rachel (@runwithrachel) were going to be there too, which I was really excited about. I’ve been following both of them on Instagram for a while so was looking forward to meeting them in ‘real life’!

So on Thursday 19th April I left work at midday and took the train and tube up to The O2 Arena, arriving at Indigo around 6:20pm. I think I was one of the first people to turn up! I checked in at the security desk, giving my name and showing my e-ticket in return for a swanky goody bag which included: two sachets of Truestart Performance coffee, a Rhubarb & Custard Torq energy gel, a signed copy of ‘A Dog Called Gobi’ book, two Chai seed bars, Hilly Lite-Comfort socks, Ledlenser NE04 head torch, and many more bits which I’ll be trying out over the next few weeks.

I bumped into Carl (@bigcarlrunning) which was lovely, and had a quick photo taken against a bespoke backdrop, before being directed all the way upstairs to a balcony bar area for the Bloggers Forum. Free prosecco and beer were on offer, with the chance to mingle and network with fellow runners and bloggers. At 7am we were invited to take a seat and listen to a variety of presentations, with compère Claire Maxted from Trail Running Magazine introducing the following:

All of the speakers were passionate, interesting and inspiring. I already drink Truestart coffee, so it was great to hear from the Founder Helena about why and how Truestart came about. Paul gave some great tips on working out the bottom (!) and Alex’s talk on nutrition was definitely an eye-opener.

I found Rachel at the bar afterwards at 8am, and we were all directed downstairs to another bar area where we took part in more networking. I met Matt and was introduced to Paul (@pauladdicott), which was lovely! We enjoyed canapés and free Corona, and at 10pm we were invited to come through and sit down for the actual awards ceremony.

I was in the toilet at that point and got separated from everyone, and was the last one in to sit down, right at the end of a row around people I didn’t know. I was going on holiday the next day and had an alarm set for 3am, so decided to call it a day and turned around and headed back out of the room, out of the Indigo and on the tube back from The O2 Arena to London Bridge, and then finally arrived home at midnight. By the time I got ready for bed and relaxed, I ended up having so little sleep that my Fitbit didn’t even register anything before my alarm went off, and I was exhausted for the whole first day of my holiday! So, although I was sad that I missed the actual awards and left without being able to say goodbye to anyone, I’m glad that I left when I did!

It was a lovely night and I really enjoyed it, and would definitely attend again if I’m invited! It was so nice to see familiar faces and meet new ones, and the presentations were really inspiring and useful. The goody bags were very generous and I look forward to trying out all of the products inside. Thank you, Running Awards!