I signed up for the Richmond RunFest Half Marathon a year ago after narrowly missing out on the 2016 registration. This event had been in the diary for so long that I’d actually forgotten which day it was on and was convinced that it took place on Saturday 16th September. Emails from the race organisers came often but I don’t remember seeing the date, and it was only a few days before the event that I checked the website and realised that the Half Marathon actually fell on Sunday 17th instead (the RunFest holds a Kids Mile, Family Mile, 10K, Half Marathon and Full Marathon over two days). Whoops!

The run started in waves from 8:55am which meant that travel would be a nightmare, as I live at least two hours from Richmond and trains don’t start that early on a Sunday! The earliest public transport wouldn’t get me in until after 9am and that would involve driving, plus a train and two tubes. Driving up and back would take over four hours in total and that’s excluding traffic and any delay in getting in and out of a packed car pack after the event; plus I wouldn’t fancy the concentration after the run. So, that left a hotel and overnight stay in London. I’d left it so late that the only hotel was a 30min walk away from Richmond and cost a few hundred (and the hotel in question kindly charged my card twice by mistake, which was nice)! I thought about dropping out of the run (it would have been so much easier to just give it a miss) but I’ve cancelled on two previous running events and really wanted to give this one a go. I was looking forward to it and had wanted to take part for 18months.

So on Saturday afternoon I travelled up to London (an hour on the train and an hour on the tube then a long walk) and checked into my hotel, consuming soup and a bowl of tomato pasta with a few litres of water before an early night.

On Sunday morning I made my way to Kew Gardens where a meaty queue snaked around the corner to the entrance of Victoria Gate, with security checking bags on entrance. The queue moved quickly and once inside Kew Gardens it was another long walk to the start line, which also housed the portaloos. Not nearly enough portaloos though, as the queues doubled back on themselves and went around trees. I’ve honestly never seen toilet queues that long in my four years of taking part in running events. I almost missed my wave and had to run to the start line with seconds to spare. 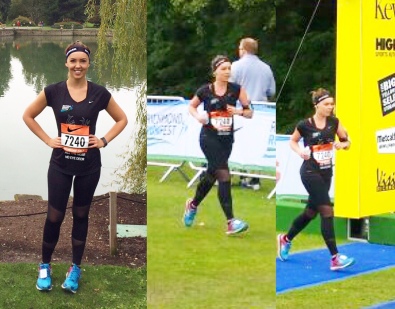 I was wearing Primark mesh leggings, official event technical t-shirt by Nike, Brooks sports bra and Brooks Glycerin 14 trainers with black 1000 Mile trainer socks, resulting in a super comfortable and weather-appropriate outfit. It was about 16C I think; not cold or muggy, so perfect running conditions.

I’d eaten porridge, a banana and a small flapjack with a bottle of water, energy drink and black coffee, and felt really good.

However, sadly I didn’t really enjoy the run itself. The route was extremely narrow at points – about two runners across – and we were playing sardines for large chunks of the run, which was frustrating. The terrain was mixed, uneven and I only saw a handful of mileage signs – none after 9 miles, so my pacing was completely thrown – and there were no pacers. I believe these points combined contributed to this being the slowest half marathon I’ve ever run, despite a solid training regime including running every lunch time and using my home cross-trainer in the evenings. I was disappointed with my time and the route.

I sucked on an energy gel packet somewhere between mile 9 and the finish line, which tasted delicious, and sipped water from a tiny bottle on the way around. There were plenty of water stations and two opportunities to pick up a bottle of Lucozade, which was great. There were supporters at various points on the route, along with friendly marshals, and the finish line was rammed with spectators, which was lovely. Overall there was a nice, bustling atmosphere.

The finish line didn’t have a digital clock (that I saw) so I had no idea what timing result I got until I checked my Fitbit; however the finish funnel was well organised with volunteers handing out heavy bespoke medals and snipping the timing tag from all runners’ shoes. I picked up a plastic bag and followed a line of tables topped with Lucozade, Metcalfe’s popcorn, green tea drink, energy bars, energy gels and of course bespoke finisher’s t-shirts. Photographers took pictures of runners with their medals, and the whole finishing element seemed seamless and well managed.

I didn’t have to use the baggage drop so can’t comment on that (and didn’t make use of the event village either as I just wanted to get back to my hotel), but exited the event without trouble or queues and made my way back with ease. Sadly the event photographers didn’t catch me at all, which is a shame, but then I don’t remember seeing any on the way around!

Despite playing sardines and losing my pacing, I’m glad I took part and still enjoyed the event. I paid about £40 to enter and I’d say it was worth it. It was an adventure and it’s another event crossed off the list! It’s also been something of a ‘comeback’ as my last running event was in June !

One thought on “Running the Richmond RunFest Half Marathon”