The last running event I took part in was the surprisingly enjoyable British 10K on Sunday 10 July, and since then, life has changed rather dramatically with the whole of August put aside to focus on personal matters.

Firstly, I’m assisting with three house moves: my little sister lives in Leamington Spa and is moving back down to Tunbridge Wells; mum has just moved out of our childhood home where she spent 34yrs (heart-breaking stuff) and I am moving out the house I currently reside in with my now-ex boyfriend. All of this is happening during August. Hence lots of jam-packed evenings and weekends and huge amounts of muscle-ache (have you ever tried to lift a machine machine??). But that’s where the positives lie. I may now be single and temporarily missing out on running, Insanity workout classes and Zumba, but am still being extremely active, with packing up houses, moving boxes and running around like a headless chicken. After helping mum move out of our large family home (which contained SO MUCH STUFF) over a number of days, my arms ached more than they ever have after an Insanity workout, and I topped 20,000 steps without even trying. As she has moved a few roads away from her existing house, I filled wheelbarrows full of plants and wheeled them around, and ‘delivered’ her bicycle round to her new house by riding it. All of this has proved to be an effective distraction so far, and with mine and my sister’s house moves still to come over the next week or so, I think it’s been a wise idea to place a hold on my usual fitness routine.

To give me something to look forward to and to provide some motivation, I signed up to the Royal Air Force Spitfire 10K at the London RAF Museum on Saturday 3 September. The medal is an actual spitfire, a PLANE (for those who don’t know, my surname is ‘Plane)’, and I have since calculated that this will be my 100th medal. How appropriate! 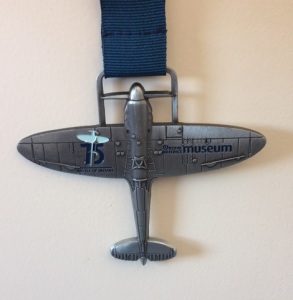 My colleague Seb has decided to sign up too and will be driving us up there; it will be nice to have the company as I’ve become so used to having my own personal cheerleader for the last 3yrs, and I’ve never actually taken part in an event without a boyfriend there to cheer me on 😦  So having Seb to run with will certainly provide a distraction, will keep me smiling and I’ll have someone to dissect the event with afterwards!

Having the time to train will obviously be an issue, but a 10K run is within my comfort zone and I have booked in to see a physiotherapist both before and after the event, just in case.

Here’s to new chapters, and to reaching milestones! 🙂