I’ve participated in the 8 mile Hospice in the Weald Tunbridge Wells Moonlight Walk for years, often completing it with my mum and sister and making it an annual family tradition. In 2013 I took part alone as mum had other plans, and I met some lovely people on the walk who I’m still in communication with now. Back then, the entry fee was £15 and included a t-shirt, finisher’s certificate and a few treats on the way round. Then in 2014 I took part with my boyfriend; I had just lost my father and needed a distraction. The rest of my family weren’t feeling up to it, but exercise is my way of releasing all sorts of emotions and I was determined to take part. Sadly that experience was a bad one and I wrote a negative review about it, as myself and boyfriend were at the front throughout and the first to cross the finish line (which was in darkness), were accused of cheating and missed out on all the free goodies en route which hadn’t been prepared in time. I sent my feedback to the organisers and didn’t hear back, so gave the event a miss in 2015. 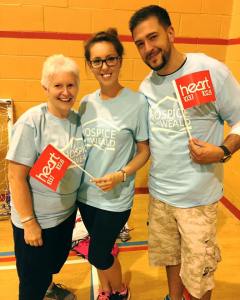 This year, myself and mum are both wearing Jawbones and tracking our steps, eager to increase our fitness levels and looking for any excuse to take a walk. When we saw posters around Tunbridge Wells for the Moonlight walk, we decided to stick with tradition and signed up with my boyfriend, all paying the £20 entry fee. The details advised a 7pm start so we arrived at the sports centre starting point early, where there was plenty of parking, to find that we may not set off for another hour. Not ideal, but there was a seemingly never-ending supply of free nibbles being passed around (lemon drizzle cake, chocolate brownies), a well-staffed t-shirt collection point (included in the price of the event), music playing, an Instagram-inspired photo frame to utilise, and clean sports-centre toilets, so we soaked up the atmosphere and posed for photos taken by Heart FM! There was a fun countdown and then off we went, quite an impressive crowd of walkers, along a safe and well-lit pre-planned route around Tunbridge Wells. There were plenty of marshals and supporters en route along with photographers, and a remarkable array of food handed out by volunteers: a bag of pick’n’mix sweets, lollies, water, bananas, strawberries and a pot of fish’n’chips! A very generous event. 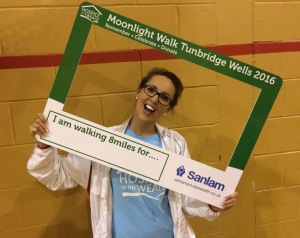 I paired the event t-shirt with running leggings and trainers with a sports jacket over the top (pockets holding my phone, inhaler and keys) and was comfortable throughout. The weather was wet with persistent drizzle, but it didn’t dampen spirits! We crossed the 8 mile finish line back at the sports centre just over two hours later and received a goody bag (containing a wristband, Cote voucher, gym voucher and lollipops) and a finisher’s certificate along with free water, bananas and more cake and chocolate. The volunteers in the sports hall cheered and clapped as we entered which was a lovely touch, and the whole atmosphere of the event was lively and positive.
The Hospice in the Weald Tunbridge Wells Moonlight Walk is a well-organised family event suitable for many ages and abilities, and I’d recommend it to others. 🙂

NEXT UP: The London British 10K on Sunday 10 July!