London Winter Run 10K
Sunday 1 February 2015
It’s super hard to find a good 10K event at this time of year, especially one of this size, and the winter theme sounded fun and unique, so I jumped at the chance to take part! There were marshals dressed as polar bears, fake snow to run through, good photography, an excellent bespoke medal, and free coconut milk and water for finishers. The course was flat and differed from other London runs. However, organisation of the start shutes was non-existent; runners were supposed to go into timed corrals but everyone ended up muddled in together as and when they arrived, so you’d get very slow runners at the start. Corrals were let go gradually and there was a long wait in-between each release. This was the first run of its kind though, so it was a good effort and a fun event – I’d recommend it to others! 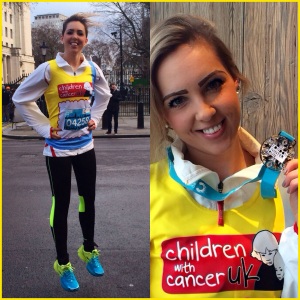 Sevenoaks Knole Park 10K
Sunday 15 March 2015
When I took part in this event last year I was recovering from a torn calf, so couldn’t enjoy it too much without worrying. It was nice to take part in full health this year. As per 2014, the route was two scenic laps around the park with a steep hill which proved challenging. The event was again well organised with marshals, with chip timing and a medal. Now that I’ve taken part twice, I won’t be returning, but I’d recommend this event to others.

Major Series South
Saturday 28 March 2015
I’ve written a separate blog post about this, which you can find here.

Brighton BM10K
Sunday 12 April 2015
When I signed up to this event, I knew that the race pack wasn’t posted out and that it was compulsory to go down to Brighton to collect it the day before the event. I didn’t think any more of it until April arrived, and I was forced to choose between travelling down on the Saturday to collect the race pack and staying in a hotel before the Sunday run, or travelling down and back both days, both of which would incur significant cost, on top of the race entry. It was a massive faff and I won’t be participating in this event again because of this reason.
The 10K took place directly before the Brighton marathon, and as I crossed the finish line all I heard over the megaphone was details about the marathon. Likewise, some of the charities which were lining the 10K and marathon course hadn’t set up in time for the 10K runners and some were only just arriving to get organized for the marathon runners, which I thought was harsh – we’re all runners regardless of distance, and the majority of us are charity supporters – us 10K runners deserve cheering on too! It definitely felt like the 10K was a less important part of the day’s events. The other negative was that the start and finish were in different places, which meant that my boyfriend had to trek around trying to find his way through closed roads/pavements in unknown territory to meet me at the finish, and then we got lost trying to find our way back out!
However, the run itself was scenic with an impressive medal (one of my favourites), a great atmosphere, and it was nice to try something new. The goody bags at the end were in an awesome ‘help yourself’ style, where runners were handed a bag and walked along a row of protein drinks and chocolate bars etc, filing up as you went along. I’d perhaps recommend the event to others, but wouldn’t take part again. 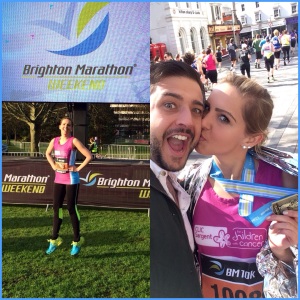 Race For Life TWells 5K
Sunday 7 June 2015
I take part most years because it’s local, my friends and colleagues join in, and because it has a guaranteed great atmosphere with hoards of supporters. The event caters for runners, joggers and walkers and encourages everyone of every age and ability to join in. I paid about £15, completed this in about 22mins (no chip timing available) and received army-style dog tags (instead of the usual medal) with a bottle of water. Cancer Research workers were walking around selling fake flowers, and many males were purchasing these for their ladies crossing the finish line – a lovely touch! The warm-up is always good fun and the ice-cream vans were very welcome.

Staplehurst 10K
Sunday 14 June 2015
This was the event that made me realize how much I prefer city running to country running. The route was pleasant and scenic, but very samely; running past quiet fields, then more fields, then another few fields… there was nothing to ‘see’ and no stimulant. With city runs, the routes dart down different roads, there are landmarks to appreciate, supporters lining the course, etc. This particular route involved road-running when the roads weren’t closed off, which was a bit risky at times, but made things slightly more interesting. I’m glad I completed this event – it was quite sweet and simple, despite the lack of atmosphere – but I felt a little bored, struggled to motivate myself in parts and will avoid country runs in future.

Leeds Castle 20 Mile Pink Ribbonwalk
Saturday 20 June 2015
I’ve completed the Walk the Walk Moonwalk and two Shine events, both of which have a huge following and attract thousands of participants. I had assumed that this event would be similar, but I was quite shocked on the day to see what looked like less than 100 walkers. I entered with my friend and we started right at the front, leading. When we stopped for a toilet and refreshment break at five miles, the few people behind overtook us, and we never saw them again. We didn’t actually see anyone else for the rest of the walk; 15 miles. The route was through woodland, fields, parts of forest etc and was extremely lonely. The lack of company meant that there was no atmosphere or encouragement, and we basically completed the walk by ourselves. I was glad to finish. The best part of the event was the free massage and free hot meal afterwards, both of which were greatly appreciated and of high quality. The medal wasn’t mile-specific and was the same medal given to 5 and 10 mile participants, which was disappointing and offered no incentive. Sadly I won’t be returning, and I wouldn’t recommend this event to others. 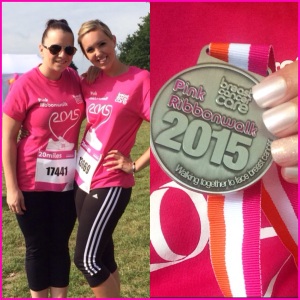 Queen Elizabeth Olympic Park 10K
Saturday 4 July 2015
I signed up to this event online months in advance and didn’t hear anything until the day before, when I panicked and emailed the race organiser, as I hadn’t received any emails or a race pack! He reassured me that I just turn up and collect my running number on the day.
I had never been to the Queen Elizabeth Olympic Park before (shocking, I know), so this was a whole new experience. The run started near the arcelormittal orbit which was fascinating, and the course looped around the park. It was scenic and different. I struggled because the weather was so hot (upwards of 26C; this added an extra 15mins onto my time) and found myself wanting to quit by 5K. Not a fan of running in the heat! I struggled over the finish line and the medals were nowhere to be seen. There was no-one directing runners and everyone was sort of milling around, wandering. I had to ask two different people where I could get a medal from! They were located round the corner of a café, upstairs and into a room, which was frustrating and tarred the experience. The stairs were narrow and there was a queue; I wonder how many runners went home without a medal. However, the event itself was pleasant and I’m glad I took part.

London Bridges 7 mile walk
Sunday 12 July 2015
We got lost! I’m not sure whether that was because the map wasn’t clear, or because I’m not familiar with parts of London, but there weren’t any marshals to guide us at one point and we went off-course for a while. Nevertheless, the atmosphere was brilliant, everyone involved seemed enthusiastic, the warm-up was top notch, the medals were cute, and I even met the CEO of Kidney Research at the finish line. We were given free balloons, free cake, free water; and a fun photo-booth charged just £3 for a collection of snaps – a great memento. A shop was on-site selling lots of bits for charity. Our t-shirts came free in the post. The event only cost about £12 to enter and has to be the best quality event to date, and was so much fun. I can’t fault it! Would highly recommend.

Rye Summer Classic Series 10K
Friday 14 August 2015
I had incorrectly assumed that this would be a timed event, so was disappointed when I turned up on the day and was given only a running number, no timing chip. The event was also promoted as a 10th anniversary special, but the medal was a bit bargain-bin and standard. There were about 100 runners taking part and a large number of these were from running clubs, which was a bit daunting. However, the run was scenic, pleasant, and seemed to be well organised, with jaffa cakes at the finish line, I hadn’t seen Rye Harbour previously so this was a lovely way to have a tour! The 7:30pm start was also manageable. My favourite part of this event was actually the participants; I made quite a few ‘friends’ along the way – runners who were struggling and we ran together, runners who caught up with me and we ran together… one runner tapped me on the shoulder near the 8K mark and told me I’d been her marker throughout! I love the running community.

Tunbridge Wells 10K
Sunday 20 September 2015
I’ve completed this event twice now, in 2012 and 2013 respectively, and I categorically stated that I wouldn’t take part again. I entered this year purely because I’m involved with one of the headline sponsors, and because I’m training for a half marathon; and because it’s local. Trust me, this will 100% be the last time. I signed up months in advance, and the night before race day I realised that I didn’t have a clue what time the run started, and I didn’t have a running number or the promised t-shirt. The website was useless. I checked back through my emails but hadn’t received a single communication. I frantically emailed the event organiser and received an Out of Office reply. I turned up at the start line at 9am purely by chance and common sense. I picked up a free t-shirt and a running number and set off. The route is extremely hilly and passed by Southern Water sewage plant (try running while not breathing in…). The medal was cheap, generic bargain-bin style. If I ever say I’m going to take part in this event again, I hope someone will knock some sense into me. Complete waste of time.

London Finsbury Park Women’s Running 10K
Sunday 27 September 2015
I really enjoyed this event. The start line was 2mins from the tube which is always a bonus, and the atmosphere was great. The bespoke medal was a welcome sight, and all runners also received a fab technical t-shirt, branded drawstring bag, foot cream, protein drinks, energy gels, running magazine worth £4, crackers, dried fruit, and lots more! This generous event consisted of two 5K laps and two water stations, and is right up there with value for money and organisation. My name was read out as I crossed the finish line (all runners love that, don’t pretend you don’t!), the marshals were enthusiastic, the pacers were accurate, and I’d definitely recommend this event to others.  Very glad I took part.

London Royal Parks half marathon
Sunday 11 October 2015
I’ve written a separate blog post about this, which you can find here.