When I started running as an adult, I quickly realised that I enjoyed it and wanted to do more of it. I pushed myself to participate in running events, and it all became very addictive. As soon as I crossed a finish line and was handed a well-earned medal, I was desperate to repeat the experience. It wasn’t long before I considered a long-term target with regards to running and events: I wanted to earn 30 medals before I turned 30. I had already been inspired to start a “30 things to do before you’re 30” list, and this particular goal was added to it, with much excitement.
I’m 26 now, and started taking part in running events and earning medals in May 2013 (aside from earning three medals and a trophy when I was in secondary education, as my school held their own 5K and 10K running events and I took part three years in a row). I am so proud that as it stands at the moment I already have 33 medals in my running box, and am set to earn at least a further 14 this year alone. 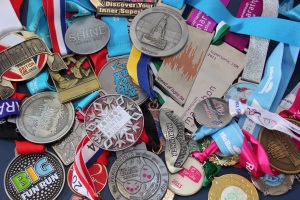 To celebrate this milestone, my friend and colleague Phil Glover was kind enough to photograph some of my collection. It was nice to get the medals out and admire them all, as they’re stashed away out of sight; as soon as I’m home from an event they are placed in my running box in the wardrobe and don’t see the light of day again. It’s weird to think I’ve earned this many and it doesn’t seem real. They’re also REALLY heavy when they’re all hung together from one hand! When I was holding them up, Phil kept asking me to raise my arm so he could get a better shot, and they felt like weights!!
So, my next goal: to support 30 charities before my 30th. I’ve supported the same charity more than once so am currently only on 23, but will easily smash the goal of 30 by the 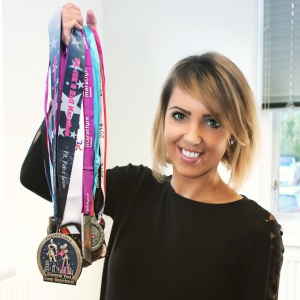 end of this year.
Then what? I don’t really know. I have carefully considered retiring (if you’ve read my ‘About’ page on here, you’d understand why!) but I said that last year and have ended up increasing my running activities for this year! I doubt I’ll be able to run for much longer, as I’ll give my sports physiotherapist palpitations and will end up needing body part replacements before you know it. So we’ll see what happens 🙂

My father passed away in June and left behind some amazing snooker trophies. They’re all engraved with dad’s name and take pride of place in a cabinet in the dining room. If I could have just one thing that belonged to him, I would chose his snooker awards. When I own a house again, I’ll have a wall (in the study, perhaps) just full of running medals and hopefully dad’s snooker trophies. I actually love that idea.