2014 event reviews
A brief round-up of all events I took part in during 2014. Photos of the medals will be coming soon in a separate post as I’m having my whole collection photographed professionally:

Sevenoaks Knole Park 10K
Sunday 16 March 2014
My first race of 2014! I had torn my calf muscle at the end of January and had ended up in A&E, so this was my first proper run following that… Not very wise, and it turned out that I hadn’t fully recovered, so now have scar tissue damage on my calf. The race however went well and I really enjoyed it; it felt good to be running again. The route was 2 scenic laps around the park with a very steep hill which proved challenging. The event seemed to be well organised with marshals, chip timing and a medal, and the weather was 18 degrees – the first warm day of the year! A great start to 2014’s events and I would recommend this race to others.

London Wembley Electric Run 5K
Saturday 26 April 2014
This event was very similar to last years’ London Wembley Dulux Color Run 5K; the entry fee was extortionate for a 5K and included just a t-shit, no chip timing or medal. The race start was delayed (no reason for this was announced), all runners were crammed into the start and it was badly organised. Most of the race itself was uphill and the finish line was pretty much empty and the biggest anti-climax; we weren’t even sure we had finished. Dressing up in the neon and glow-sticks was fun but costly. I wouldn’t take part in this event again.

London Moonwalk Marathon 2014
Saturday 10 May 2014
This is the best value event I have ever participated in, and the £50 entry fee included a t-shirt, high viz cap, a Wonderbra bra to decorate, full training plan and advice, personalised Walker Number, luggage label, weather protector, space blanket, a hot pasta or rice meal, all the water you can drink, facilities along the route, a gorgeous medal, incredible entertainment, and more. This is so much more than a walking event! This year’s theme was rockabilly, so I researched loads of different ideas, purchased swatches of material and sewed and glued the bra to my heart’s content. A walking marathon is always extremely tough and I sobbed my way over the finish line, but am so glad I took part and am aiming to complete the half marathon moonwalk next year. 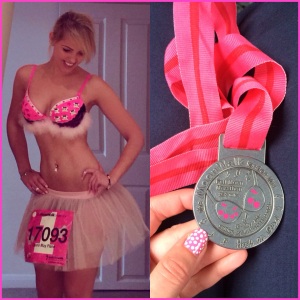 Bupa London 10,000
Sunday 25 May 2014
This was my second year in a row at the Bupa 10K and once again I thoroughly enjoyed it. It was so well organised with supporters lining the relatively flat course, chip timing, a fantastic medal, free t-shirt and goody bags, all for a reasonable entry price. I can’t fault it!

8 Mile Hospice In The Weald Tunbridge Wells Moonlight Catwalk
Friday 13 June 2014
I was emailed a feedback form following this event, and this is how I replied: “Myself and partner were the first people to set off and we remained at the front. We’re keen runners, fast walkers and train hard. Sadly this meant that hardly any marshals were at their posts, and the ones who were seemed rude and unhelpful. The signage was confusing so we went off-course, and no food was ready at any of the points either, meaning that we missed out on the soup, fish & chips and ice-cream. The finish line was in darkness and the one marshal at the finish line accused us of cheating – which we 100% didn’t do! Myself and partner were given goody bags – his contained a biro and keyring but mine was just full of leaflets. Usually at the end of every event I do, I’m full of pride and endorphins, but this event left me feeling very low, annoyed, and quite frankly wishing we hadn’t taken part. We were massively penalized and missed out just because we’re fit and healthy. A stressful and upsetting experience. I know it’s for charity but I can think of other ways I’d rather spend my time and money.” No response received, and we definitely won’t be taking part again.

British London 10K
Sunday 13 July 2014
Sadly another event which left me upset! The start line pens were cramped and confusing with some delays. The finish line was an anti-climax and we then had to walk about a mile away from the event area to the baggage collection (even though I didn’t have any baggage) to collect a packaged-up medal. It turns out I picked up the wrong medal as there were two types and I should have had the Help for Heroes one. There were no signs or direction and no-one seemed to know where they were going. The entry fee did include chip-timing and t-shirt, but the organisation was a shambles compared to the Bupa 10K and I wouldn’t take part again.

Maidstone Mote Park Big Fun Run 5K
Sunday 13 July 2014
This event was such a pleasant surprise! I admit, I wasn’t expecting much from this race and was doing it purely to train up my boyfriend Noel, who had taken up running as a hobby and we thought that this would be a good event for him to start with. The route was scenic through the park, the medals were large and chunky, there were goody bags with sweets etc, and an enthusiastic MC was giving a running commentary during the race and read out both our names as we crossed the finish line! I’ve never had that before, and Noel loved it too. The whole experience was fantastic, such good value for money and I was really surprised. Would definitely recommend to others. 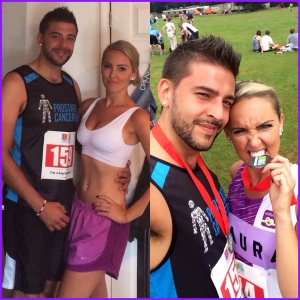 London Wembley Run To The Beat 10K
Sunday 14 September 2014
The only thing bad about this race was having to wake up at 5am in order to get to the race on time; the transport links to London from Tunbridge Wells aren’t that great! The race profile was also perhaps understated… I thought the route would be mostly flat and don’t think I would have been so keen to take part if I had known the full extent of the hills! However, it was a good challenge and I really enjoyed this race, it went well. Good organisation, free t-shirt and chip-timing, an impressive medal, free deodorant (thanks to the Sure sponsor), free protein ice-cream and energy drinks, photo opportunities inside a giant boombox, a village area with food carts… loads to see and do and a great buzzing atmosphere. My last two events at Wembley Park have been a disappointment so I was dubious, but this has restored my faith in events at this location and I would certainly recommend Run To The Beat to others.

Cancer Research UK Shine London Half Marathon
Saturday 27 September 2014
I completed the full marathon last year so thought I’d do the half marathon this year. The atmosphere was incredible, the entry fee was reasonable and included a t-shirt, medal and goodies throughout the evening (water, juice, chocolates, bananas, etc). The route had plenty of toilet stops and marshals who were friendly and encouraging. It was lovely to see so much of London. Now that I’ve done both events I’m not sure that I’ll return, but would certainly recommend it to others and don’t have a bad word to say about Shine.

Bournemouth Speed Of Light 5K
Saturday 5 October 2013
I completed the 10K last year so thought I’d do the 5K this year. Yet again it was incredible and I absolutely loved it. The route was flat along the scenic beach and the weather was warm, even in October. There were crowds of supporters, the event was really well organised, and the cheap entry fee included a t-shirt, chip timing, goody bag and an amazing chunky medal. This race is part of the Bournemouth Marathon Festival, where a 1.5K, 2K, 5K, 10K, half marathon and a marathon all take place over two days, so the atmosphere is always buzzing and so exciting! Would highly recommend.

Hastings Poppy Run 5K
Sunday 26 October 2014
I’ve never been running in such extreme wind before! Wearing 4 layers of sports clothes I ran against strong winds and it was actually quite tough, particularly on my poorly lungs. The route was great, completely flat along the sea front, and the organisers were friendly and enthusiastic. It was a surprisingly small race with a handful of people taking part, but the medal was fantastic, the goody bags were impressive and the free t-shirt helped against the cold. A pleasant race; would recommend to others. 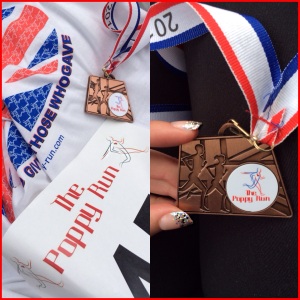 Hop Farm Spooky Sprint 5K
Saturday 15 November 2014
This race was supposed to be at 5pm in the evening but was moved to 3pm due to water-logged fields which wouldn’t be safe in the dark. So, it wasn’t really a night-time or spooky race as advertised. The organisation was a bit sketchy and when we arrived it wasn’t clear what to do or where to go, and we couldn’t find the free head torches. Regardless; these points didn’t really bother me and I actually quite enjoyed this event. A radio station was live onsite, and The Cheeky Girls made an appearance and were right in front of me at the start line! The route was flat, there was a good crowd, the medal was awesome, there was an impressive goody bag, a great t-shirt and chip-timing. I’ve never run through muddy fields before and found it slightly challenging, slipping and sliding around with wet feet and not much grip! But it was a fun experience, a great little race and I’m glad I took part. 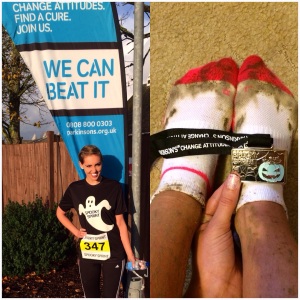 London Greenwich Park Movember MoRun 10K
Saturday 29 November 2014
The only bad thing about this event was that my stick-on moustache wouldn’t stick because of my make-up! So, I ran mo-less. The event was really well organised with a great warm-up, clear signs, the most enthusiastic marshals I’ve ever seen, chip-timing, the BEST medal in the shape of a moustache, free crisps and protein ice-cream… I loved it. The route was 2 scenic laps around the park with 2 absolute killer hills (so 4 in total… argh!) but the atmosphere was fantastic, there was loads of runners in fancy-dress and the moustaches were brilliant. I started to really struggle on the last hill before the finish line and slowed down to almost a stop, but a lovely kind runner came up beside me and encouraged me, cheering me on, and he ran with me to the finish line. This event was the best way to end a great year of running!

Virtual races
I also took park in 2 virtual races during 2014: a 10K in October and a 5K in November. This is how it works: you opt to run or walk 5K, 10K etc within a certain timeframe and pay an entry fee online. A minimum of each entry fee goes to charity. On successfully completing your chosen distance before the closing date, submit proof (screen-shot of a running app, photo of a Garmin/running device etc), by emailing it in. You receive a finisher’s medal in the post! This is such a great idea and the medals are lovely. I complete a road-run (which I would do anyway) in my own time and my own route, snap-shot my RunKeeper app and email it across. I love the fact that I’m not doing anything out of my usual running routine, and I’ve donated to charity in the process. I aim to complete a few more of these virtual races next year.